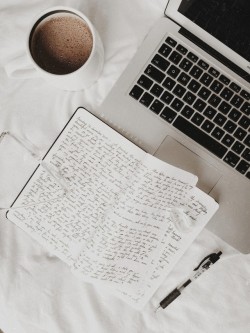 Have you ever literally sat there staring at a blank screen for over an hour? Okay, perhaps that’s a little  excessive. But it feels like an hour. Or maybe it really is…

Anyways. You have all these ideas and thoughts rolling around inside of your brain but you can’t seem to put them into words? It’s not coming together like you imagined or hoped and your frustration grows and grows. Yeah. Me too.

My inspiration to write kicks in the strangest times. It seems that my mind is always busiest after midnight. But I just wanted to share something with all you writers, in case I’m NOT the only one that struggles with this.

Let me start by saying that I have so many visions for a writing career. I know that by the beginning of next year, I want to have finished my first book. I started blogging a couple years ago, but I didn’t want it to stop there. I have had dreams of writing a book for as long as I can remember, but there was so much to it in my mind. So many questions…

I began talking to other writers. I found some authors online that I reached out to. Their advice to me was simple: write something that YOU would want to read. Do not focus so much on writing for others. Create a story that speaks to YOU. Write a book that would grab YOUR attention. Because you’re never going to write a book that everyone loves. You just have to love it.

Where do you start? I remember staring at a blank screen for an hour at one point (or so it felt like). I was so lost. I had so many ideas in my head, so many visions. But I just had to get started somehow. There was one person in particular who helped me with that. Someone who had just written their first novel. Someone who understood the struggle.

She too had dealt with this, as every beginning writer does. She advised me to just start writing. Don’t worry about knowing how the story will end, or what is going to happen in the next five chapters, just write. Write and allow the story to guide you. My mother said, “the characters will tell you where they want to go.”

But do you know how many times I told myself this is was too hard and I can’t do it? A LOT. I still get very shy about sharing my blog posts, so how will I publish a whole book? I’ve asked myself this so many times. I’m just going to keep writing. By doing so, I’m allowing myself room to grow as a writer.

So, I’m going to write a book. I don’t care if it takes me 20 years. (Please don’t take 20 years, Sara.) I don’t care if I write it within the next year but it takes me several more years to muster up the courage to do anything with it…I will. I hope to take you guys along the journey with me as I continue blogging and becoming a more mature writer. Never give up on your dreams. Take your vision and fly with it. In all you do, give glory to God. It’s okay to be passionate about things. In fact, some of the most successful people are driven by passion. But make sure that living for God is your strongest and most burning passion first and foremost, all else comes after! Writing is a beautiful thing, and some people have a real God given talent for it. You can create a beautiful masterpiece with words, I just hope that I can write in a way that will move people, even a little, towards God.